According to the Observer Reporter:

Washington County declared a disaster emergency Tuesday after a second case of coronavirus was made public earlier in the day.

The second case was announced as another 20 positive cases of the virus were reported Tuesday afternoon in Pennsylvania, the state Heath Department secretary said.

The increase takes the statewide total to 96, with Allegheny County rising by two, bringing its number to eight, Secretary Rachel Levine said.

The three new presumptive positive cases are all young adults over the age of 18 who are in isolation at home, Downs said. Two of the patients acquired COVID-19 through recent international travel and one through recent domestic travel.

The Washington County Board of Commissioners officially has declared a disaster emergency to allow coordination of its emergency response to the COVID-19 pandemic, with two cases now reported in the county and 13 in southwestern Pennsylvania.

The declaration allows commissioners to suspend certain governmental procedures and formalities in monitoring and reacting to situations, all while working with community partners, hospitals, municipalities, and county, state and federal officials.

Here is a link to the WTAE Facebook video with Washington County officials as of Monday March 16, 2020. This video is one day old and was recorded before the state of emergency was declared.

The Trib Live is reporting that:

I don’t expect UPMC to perform elective surgeries much longer though. Experts say the number of Covid-19 cases grows exponentially once it is circulating among the public.

It looks like the Chinese government wants greater control of information about Covid-19 coming out of China by expelling western journalists according to this tweet by the New York Times:

Tube City Media (out of McKeesport) is reporting:

Clairton officials announced Sunday afternoon that a city resident who may be suffering symptoms of COVID-19 has been treated at AHN Jefferson Hospital.

Clairton Councilwoman Denise L. Johnson-Clemmons and Councilman Tony Kurta said via Facebook the city was notified and is working with Allegheny County Health Department to get additional information.

At a joint news conference Saturday, health officials from the county, AHN and UPMC reported Allegheny County’s first two confirmed cases of COVID-19. The patients were both adults, one in their 70s and one in their 60s, who were exposed to the virus during travel out of state.

Click here to read the rest of the story over at Tube City Media.

A professor at the University of Pittsburgh posted a link to his Twitter feed Thursday that caught me by surprise. It’s a relatively positive story about the Mid Mon Valley by Laurent Belsie of the Christian Science Monitor. The article mainly focuses on Charleroi but also mentioned are Donora, the City of Monongahela and Washington County. A few people and businesses you might recognize are:

I have an issue with the title: “In Steel Country’s River Towns, a Rising Spirit of Recovery“. Wouldn’t you say that’s about 30 years out of date? “Fracking Country” might be more like it now a days.

I’m so happy for Casey and Eric at Perked Up Cafe. They have a beautiful, thriving business and they certainly deserve the recognition!

Many people in town have been concerned about the deterioration of the former American Legion Frank Downer Post building at 248 West Main Street. The first three photos below were taken in 2015 showing a huge gash in the roof resulting in water flooding the interior of the building every time it rained. Thankfully the owner saw fit to replace the wood deck and install a new asphalt shingle roof.

The front facade is gorgeous and is still in good shape. It is the centerpiece of interesting architecture on the 200 block of West Main Street. The building is certainly worth saving. (click the the photos below to enlarge) 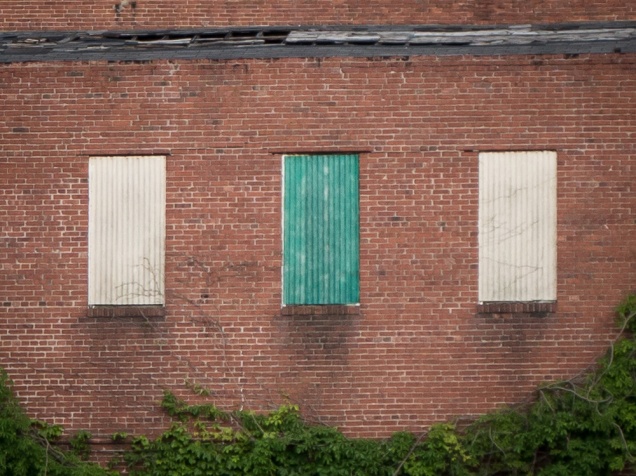 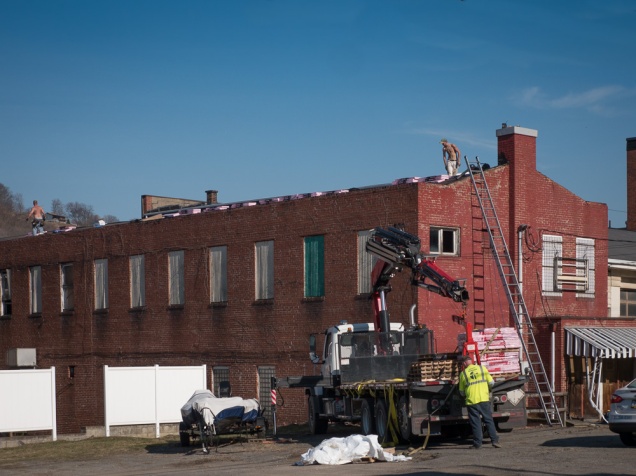 Check back tomorrow for part 2!

I was looking back in the archives and realized that February 10th, 2016 will be Lost Monongahela’s 8th birthday! It all began with this post about the D.E. Gamble grain elevator on 7th street. Back then online information about Monongahela history was sparse. The best resource I had at the time was the Historical Magazine Of Monongahela’s Old Home Coming Week: Sept. 6-15, 1908. This magazine is still a helpful but what if you want to find out something related to “chickens in Monongahela in 1891”? Well, you had to walk down to the Monongahela Area Library and look through a years worth of Daily Republican microfilms. It’s great having this resource in town but the problem is that you can’t perform a boolean word search on microfilm. However, in 2016 you can slake your thirst for chicken related information on Newspapers.com in less than a minute:

Just as significant is how much better the map offerings are online. This is an example of the map quality you would typically find back in 2008:

Compare that to the same map now available from the Pennsylvania Historical and Museum Commission:

The Caldwell Atlas is another wonderful resource but imagine how exciting it would be if you could find maps dating back to 1885 showing the following information for each building in Monongahela: END_OF_DOCUMENT_TOKEN_TO_BE_REPLACED

I just heard Seth Godin say this on a podcast today regarding writer’s block:

So expect to read more poorly written posts here on Lost Monongahela in the next few days!